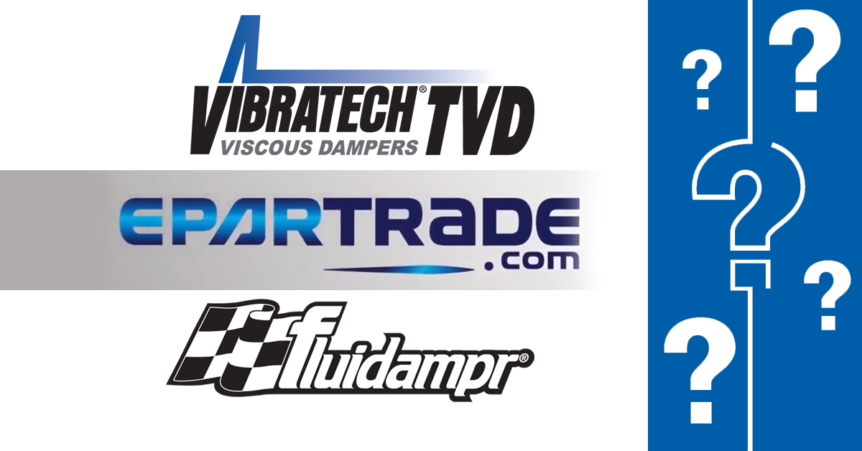 As part of the 2nd Annual Race Industry Week – EPARTRADE invited us to have a conversation about our viscous damper design attributes and answer questions important for the racing industry. Here are a few questions our lead engineer Aaron Neyman answered direct from Jeff Hammond (NASCAR personality – former crew chief) and the racing community.

Jeff Hammond “One of the most impressive products that is so necessary in keeping an engine smooth and running like it’s supposed to”…How does [Fluidampr] handle the [wide] range in [horsepower]?

Aaron Neyman Especially in diesel performance we have worked with a lot of builders that build the Inline-6 Cummins engines. They push a whole lot of power through a 45mm bolt circle with four bolt pattern that hold it on. A Fluidampr performance damper is up to the task once you get to those kind of power levels. We’ve worked with teams that build large engines like Firepunk Diesel and D&J Precision Machine. The damper performs great for those applications. We have added updates to the connection between the damper & crankshaft by coming up with bolt kits and what we call our Full Power Kits. These fasteners bring to market friction shims that go in-between the rear damper face and the nose of the crankshaft. We partnered with ARP, which many consider industry leading bolts, to secure the entire connection. These parts allow for more clamping force effectiveness which leads to a better grip between the damper & crankshaft. Reducing any chance of the damper connection coming loose and allowing for better transfer of harmonics.

Aaron Neyman For racing applications we can look to the marine performance world. Marine applications are either at idle or at full throttle and could sit on full throttle for hours. We’ve done viscous damper retrofits for every generation of small block Chevrolet and other applications. When you are pushing peak power, you are creating the highest frequency vibration which generate the most amount of heat. Rubber dampers work by taking a large peak and knocking the center of it down into two smaller peaks. An effective advantage when properly tuned. One disadvantage is as you push more heat through the rubber, the rubber properties change leading to a softening of the rubber. That heat allows the two peaks to drift around. Let’s say your first peak is at 4500 RPM. Your rubber damper is most effective running at 120 Degrees Fahrenheit, so as the rubber starts to heat up closer to 200 degrees those peaks tend to shift down. If the secondary peak is at 5500 RPM that peak will start to drift closer to 4500 RPM resulting in more crankshaft twist. Viscous dampers don’t create that sharp peak or split peak instead it softens the peak like a bell curve shape. It works as a pure damper without a peak shift because of heat. Viscous dampers don’t rely on the resonance to split the peak so the peak might go up and down a little with temperature but it never shifts around. You can actually take your peak into an rpm that is beyond where you’re going to race at or even below. This allows you to place the peak in-between shift points, so you have an idea of where that’s going to be and then it never moves throughout the race. For more information on viscous dampers – Click Here

Jeff Hammond “Ever since [Fluidampr] has come onto the motorsports scene you have revolutionized a part of the engine that has to be done and done right”…How does [Fluidampr] keep innovating?

Aaron Neyman For parts that have been around for a while there’s always new details or ways to improve things [especially] as technology changes. Racing is all about taking advantage of better technology as it becomes available. You can get that edge and that’s one of the things that we try to keep up on. Such as the application of Internal bearings making the part more durable – to an even higher confidence level. We looked into this application because of our Vibratech products that run over the road truck engines. The big industrial Inline-6 engines tend to put out a lot more vibration. Also natural gas & pumping engines will wear out over time, so we are frequently trying to increase the window on those industrial parts. We take that technology and pass it on to our racing products. So [they to] have cutting edge technology proven through industrial workhorses. For more information on the history of Fluidampr – Click Here

As Jeff Hammond commented “[Fluidampr] is good for the life of the engine.” Think of a Fluidampr as an insurance policy for all of the time and money poured into your performance engine projects. Fluidampr viscous damper design is built to last and engineered to be the solution you are looking for.

Fluidampr has no connection or affiliation in any way with General Motors or Chevrolet.  Reference to any trademarked product(s), name(s) or OEM number is intended solely for reference to the usage for that Fluidampr part.  No product were manufactured by the previous mentioned companies or their suppliers.