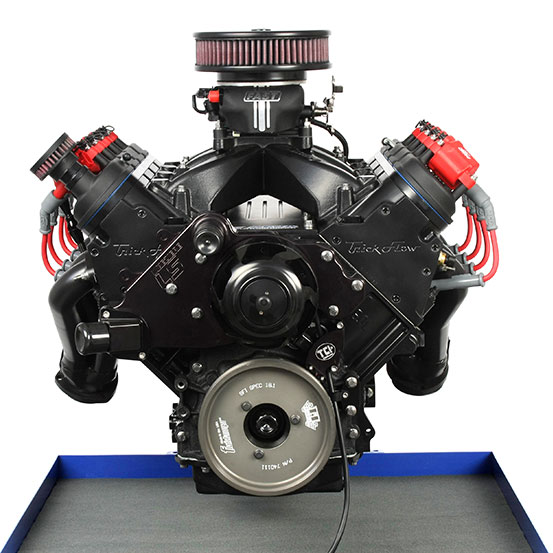 By Scott Parkhurst
Published by enginelabs.com

In the mid-2000s, before Formula 1 adopted engine speed limits (and then later, hybrid engines), the Cosworth CA 2.4L flat-plane crank V8 achieved an incredible 20,000 rpm on the track. It was reported that crankpin loading reached 13,088 pounds. To control vibration forces at such high-RPM, engine builders utilized 13 different harmonic-damping devices. Five of them were of the viscous type. These included one large viscous damper on the back of the crankshaft and one on each of the four camshafts.

The crankshaft inside your engine acts sort of like a torsional spring. Each time a cylinder fires on the power stroke, it pushes down on the rod journal. Naturally, the crankshaft pushes back, but the deflection of the crank creates a harmonic vibration on every power stroke.

This happens over and over again as the engine is running, and the vibration changes frequency with increasing and decreasing engine RPM. The more the connecting rod journal is loaded, the more severe this harmonic vibration gets. It can be translated by saying the more power each cylinder makes, the harder it’s hitting the crankshaft. 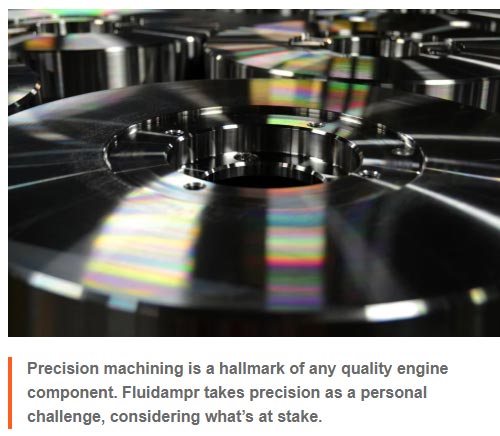 A Bad Case of the Shakes

Over time, or sometimes very quickly, torsional vibration will find the weak spot in the crank and snap it. Fluidampr says it’s seen failures at the crank snout, the flywheel, and every point in-between. Vibration passes through metal-to-metal contact. The oil pump, timing gear and chain, valvetrain, and main bearings all see added wear or hastened failure. Accessory brackets fracture; bolts back out; drive belts slip or come off.  You’re in for hard times if you don’t get torsional vibration under control at the source.

Consider the multiplying factor of RPM, too. The faster the engine is spinning, the more each of these vibrations is multiplied. Another factor is stroke length, since the further the rod journal is from the crankshaft centerline, the greater the effect of the vibration on the rod journal. 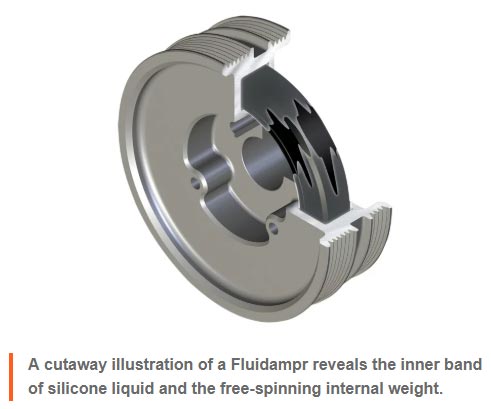 An additional factor is the weight of all these spinning components. High-performance engines require stronger components to survive the increased cylinder pressures and higher engine speeds typically found in racing. Thicker, heavier components with more mass mean more weight is going to be thrown around, multiplying the impact of the vibrations and harmonics. Mass determines resonance, and mass has stiffness and spring inertia. All of these factors affect the velocity and torque behind the vibration.

Additionally, any imbalance in the engine outside of this crankshaft torsional vibration will overlap, multiplying the effect. Think about all of the vibrations in the valvetrain, from the lifters to the rockers, and then the harmonics from the valves slamming shut against their seats. This is multiplied when a gear-driven arrangement is connecting the crankshaft to the camshaft, as the harmonics can potentially travel from one component to the other. 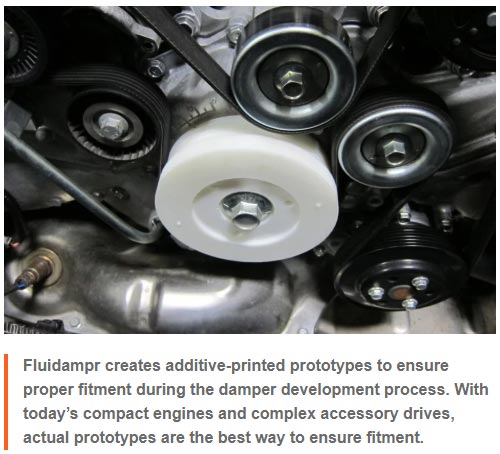 Finally, let’s add a slew of crank-driven accessories to the mix. While they don’t directly act upon the crankshaft (the belts driving them eliminate that threat), they do add vibrations to the engine itself through the brackets holding them to the block and/or heads. You now have multiple harmonics on different frequencies, all changing with engine speed. They act against each other like a series of ripples formed by pebbles being thrown into a pond.

All this shaking creates harmonic frequencies that stress the metal inside the engine — most typically within the crankshaft. Eventually, this will result in cracks or even breakage. It’s like bending a piece of metal back and forth over and over again — eventually, it will fail. 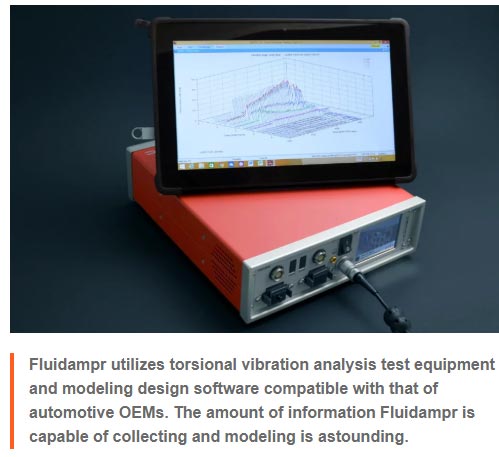 To combat all of this vibration, harmonic dampers (also called balancers or absorbers) are used. They are designed to absorb and dampen these vibrations to eliminate harmonics and the damage they create. The result is not only a smoother running engine across the RPM range but an engine without the potentially damaging vibrations and harmonics. The harmonic balancer helps minimize any torsional crankshaft harmonics and resonance. The damper is composed of two main components: a heavy inertia mass and an energy-dissipating element.

Typically, the factory energy-dissipating element is made of rubber or a similar elastomer. Aftermarket damper manufacturers have branched out from rubber, using synthetic elastomers, clutches, springs, or viscous fluid to absorb and control the wayward energy. The mass counteracts the torsional crank motions and, in concert with the energy-dissipating element, absorbs the harmonics vibrations. 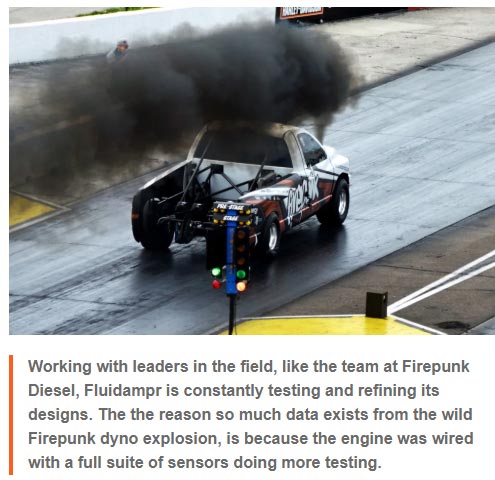 You’ve read the word “viscous” a couple times already, and we’re guilty of not fully explaining it yet. A viscous damper uses a fluid instead of a solid material to eliminate vibration. It makes sense, since the thick fluid sealed inside this kind of damper can’t wear the way other  materials used in this application can. Plus, a highly viscous fluid does an amazing job of eliminating harmonics. 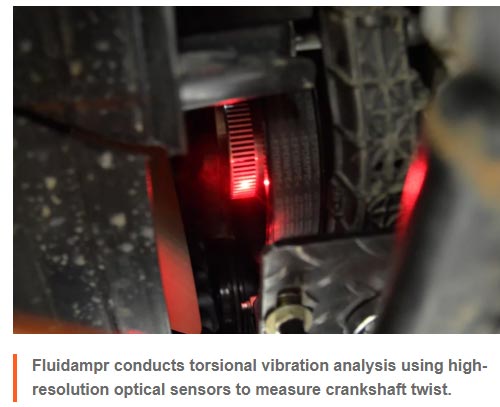 “From OEMs in North America and across Europe, we’re seeing viscous dampers incorporated into more and more high-performance, high-RPM engines. We’re being sought out for multiple damper design and development projects,” says Ivan Snyder, Fluidampr’s business development manager. “Our Fluidampr performance dampers stand above in quality. Our recent proprietary advancements in thermal management, silicone properties, and strategic position of mass have been learned from extensive cross-industry experiences, such as marine and defense. Along with our nearly 35 years in motorsports.”

Today, Vibratech TVD (the parent company of Fluidampr) is considered a leader in torsional vibration solutions. They develop for the widest OEM-application range in the industry including automotive, marine, commercial, off-highway, rail, oil and gas, and defense. The viscous dampers they manufacture range from one-pound units for camshafts to 7,000-pound crank dampers for gas compression pumping engines.

A Fluidampr viscous damper contains a free rotating internal inertia ring that constantly shears through the thin layer of silicone (the viscous liquid) surrounding it. The silicone does not allow the vibrating waves to pass through it, literally absorbing them away. This design provides broad coverage throughout the RPM range and optimum damping under higher power-density. Plus, superior thermal stability can be built-in, since the thick silicone isn’t impacted by the high temperatures commonly found in high-performance situations.

Vibratech TVD has a long history in the energy absorption business, always using viscous fluids as a medium. The first American Houdaille (rotary-vane lever-arm) shock absorbers were made by the company which eventually developed the Fluidampr. Based in Buffalo, New York, the company (then called Houde Engineering) wanted to find a factory manufacturer (OEM) market for its line of shock absorbers. They were successful, and before long many new American cars were equipped with Houdaille shock absorbers, including Lincoln (starting in 1923), Pierce-Arrow (from 1925, also based in Buffalo), and Ford (beginning in 1929, on the Model A).

After World War II, the invention of silicone (by Dow Chemical) opened the door to many new inventions, and the viscous damper was one of them. Bernard O’Connor, the assistant chief engineer at Houde Engineering who patented the viscous torsional damper, is quoted as saying: “Viscous silicone is valuable because of its inherent stability and its nearly flat viscosity curve, which permits constant operating characteristics regardless of temperature ranges or changes.” 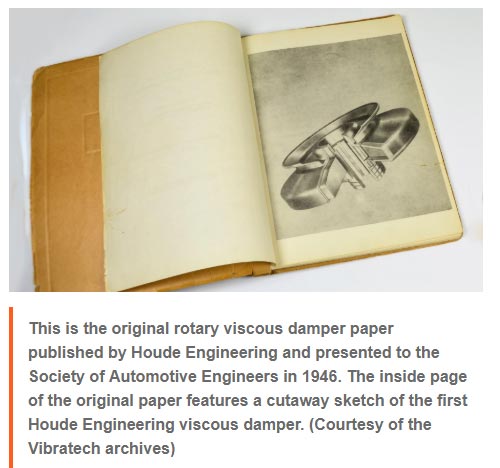 The fluid itself is very thick. It’s not an oil and does not flow freely. It’s like a firm slime, which gives easily to the touch but doesn’t pour. It is forced into the damper housing under high pressure, and then the fill hole is welded shut.

Equipping industrial diesel engines like these would become the cornerstone of the company from the 1940s until the mid-1980s. At the time, prominent racing engine builders were looking for improved harmonics control. The power production and RPM levels were reaching higher and far beyond the design-intent of the factory harmonic balancers.

Racing teams asked for a premium-quality viscous damper designed specifically for motorsports, and the modern Fluidampr was born. Racers of all disciplines soon discovered the benefits of running the viscous dampers. Engines equipped with Fluidamprs were winning on drag strips, road courses, circle tracks, off-road, tractor pulls, offshore boats, and more. The company’s experience with the product, and its engineers’ understanding of the sources of harmonics and how to best eliminate them, translated well to the motorsports environment. 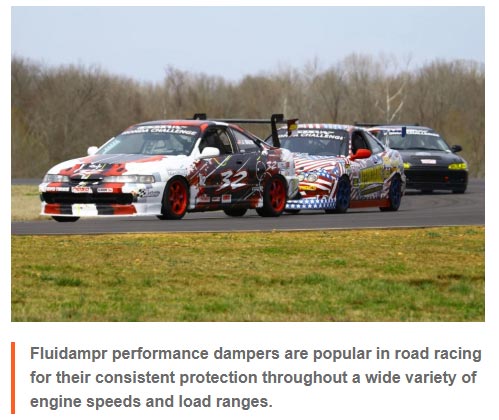 Keeping Up With the Times

Today, the same basic Fluidampr viscous-damper design remains intact but improvements in materials, manufacturing, and quality have all taken place. The addition of modern CNC-based machining processes, advanced bearing materials, and precision computer-controlled laser-welding machinery all add up to improved performance and longevity for the products.

Additionally, Fluidampr engineers have the latest technology for torsional vibration testing and analysis (including mobile setups) to measure harmonics and vibration on moving vehicles and operating machinery. They use thermal imaging devices to monitor the heat being dissipated by the dampers. Not only have the tools to make the product gotten better, the tools to develop and test it have too.

Available for all of today’s most popular performance engines, as well as all of the common diesel engines, off-the-shelf Fluidampr applications exist for a wide range of engines. They are still manufactured in Springville, New York, near where they were originally designed in Buffalo — proudly an American-made product from their inception. 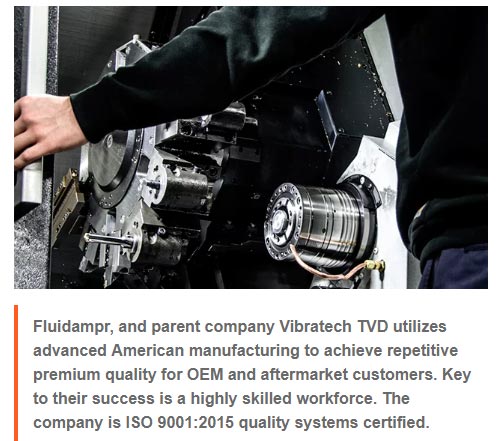 The demand for these premium products means that Fluidampr production has tripled since 2009. This is the result of several recent OEM projects in the U.S. and Europe for high-performance, high-RPM applications (which can’t be publicly disclosed due to NDAs). Additionally, there have been collaborative projects with leading aftermarket manufacturers and builders, including being the source of dampers for Chevrolet Performance’s Corvette Racing division since 2016.

The future of this technology is evolving quickly. We already mentioned the F1 engine using viscous dampers on its camshafts, and other applications are using them to eliminate harmonic issues in drivelines as well. As engines continue to develop, Fluidampr’s viscous dampers will continue to evolve with them. They will continue absorbing harmful vibrations across the RPM band and helping all types of street, off-road, race, agricultural, marine, military, and transportation machinery make more smooth power and last longer.