By Brian LeBarron
Published in THE SHOP magazine

Reducing materials and improving fuel efficiency are pillars of modern OE engine design. Fortunately, that doesn’t mean sacrificing performance. Who would have thought 10 years ago that 150-horsepower-per-liter would be common off the dealer showroom? With 25-plus highway mpg to boot?!

To get there we’ve seen remarkable achievements in forced induction, direct injection, cylinder power density, higher rpm and streamlined aerodynamics. And the trend is projected to continue. According to the SEMA Future Trends Fall 2018 report, “By 2025, 58 percent of new vehicles will be turbocharged.” In addition, “engines over 5.0L will see a decreased [market] share as a result of these engine advancements.”

These remarkable achievements are not without challenges. With designers and performance engine builders pushing the limits of smaller displacement, materials and components that add durability are back in focus—including the crankshaft harmonic balancer. This essential building block eliminates destructive torsional vibration caused by internal combustion, and serves as a safeguard against premature engine failure. 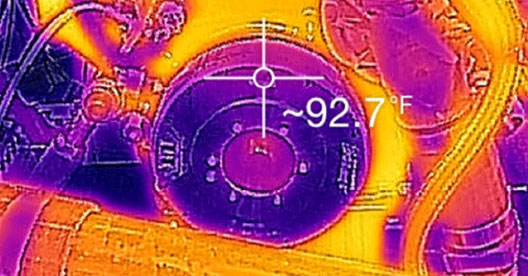 The Case for Viscous Dampers

With so much power flowing from these smaller engines, are today’s stock harmonic balancers up to the triple challenge of higher power density, rpm and engine bay temperatures? How well do they function under these conditions? How long do they last?

The viscous damper has been a mainstay in the aftermarket performance racing industry since the introduction of Fluidampr performance dampers in the mid-1980s. The original Fluidampr products started out excellent over 30 years ago, and have advanced along with the industry to combat the challenges modern engine builders currently face.

And the industry has been here before. Maybe not in bolt-on aftermarket form, but we can look to Formula 1 for an example.

What could be argued as the pinnacle of V-8 engine performance was reached in the mid-2000s. Before Formula 1 adopted rpm limits and then hybrid engines, the Cosworth CA 2.4L flat plane crank V-8 achieved an incredible 20,000 rpm on the track. It was reported that crankpin loading reached 13,088 pounds! (Ian Bamsey. “King of Speed.” Race Engine Technology magazine, issue 73)

To control vibration forces at such high rpm, engine builders utilized 13 damping devices, and five of them were viscous—one large viscous damper on the back of the crankshaft, and one on each camshaft.

A viscous damper contains a free rotating internal inertia ring that shears through a thin layer of silicone. This design provides broad rpm coverage and optimum damping under higher power density. Plus, superior thermal stability can be built in. The technology is often found as original equipment on premium supercars.

Detroit’s Big Three are realizing the advantages of viscous crankshaft dampers, and have turned to Fluidampr and its parent company, Vibratech TVD, for assistance.

For one project, by applying proprietary advanced design and manufacturing capabilities, the Fluidampr and Vibratech TVD teams collaborated to create a viscous damper for a high-power, high-rpm, high-impact shift point load application. The viscous damper came in 11-percent lighter than the existing OE elastomer harmonic balancer, with improved overall NVH control and durability as well.

Another example: The Vibratech TVD design team got creative when a marine OEM needed help with a GM 6.2L V-8 base performance engine. The solution included constructing the damper’s outer housing out of steel to provide optimum damping, and creating an integrated accessory pulley that doubled as a heat sink.

When tested by the OEM, the Vibratech TVD viscous damper design far surpassed a comparable elastomer harmonic balancer. Fluidampr then further adapted this design principle in its LS3/L99 Gen-V Camaro SS application that has since become popular among road course and endurance race teams. 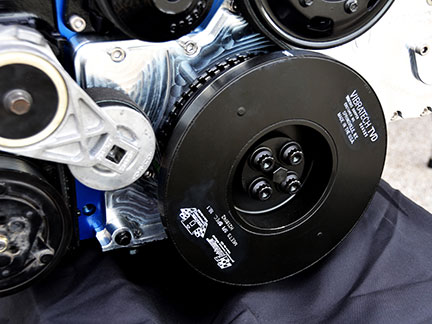 “We build high-performance diesel engines—3,000 horsepower for truck pulling. We decided to work with Fluidampr because they were open to helping solve our problems, and the viscous damper operates in a wide environment range,” said champion engine builder Drew Pumphrey of D&J Precision Machine.

The result of Pumphrey’s request was a robust upgrade to Fluidampr’s 5.9L and 6.7L Cummins applicationsinspired by Vibratech TVD’s extreme commercial trucking experience, and the introduction of a new hardware mounting kit as well.

It’s said that innovation comes from looking outside your comfort zone, then applying it to advance your work. That is true at Fluidampr. While the brand has been a mainstay for more than 30 years in the performance aftermarket, it is focused on leading vibration protection and harmonic balancer durability into the future as engine building and motorsports continue to evolve.

(Left) Torsional vibration analysis. (Right) Ivan Snyder of Fluidampr stands on the left part of the frame next to Drew Pumphrey of D&J Precision.

ABOUT THE AUTHOR
Brian LeBarron is the marketing coordinator at Fluidampr. He also served the powersport and automotive industry for more than 20 years.